ONCE UPON A TIME IN PEKING

John Shakespeare lived in Peking in 1936. Now in his 80s, he has just gone back there for the first time. His son Nicholas Shakespeare tells the tale.

BEYOND THE KILLING FIELDS

Nearly 50 years ago, Nicholas Shakespeare’s family was forced to flee Cambodia. Now he and his father return for the first time since the fall of the Khmer …

THE DANCER AND THE TERRORIST

When Peru’s most wanted man was captured in 1992, a young ballerina went to jail too, for harbouring him at her studio. The story was turned into a novel and … 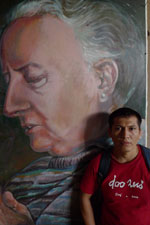 The angel of Piura

Telegraph
12 Nov 2010 – For decades a Manchester woman named Anita Goulden ran a home for destitute children in a town in northern … By Nicholas Shakespeare.

Read on ‘The Telegraph’ …

The Return of the Native, Ox Travels

My sister and I grew up in Brazil during the 1960s. Thirty years later, my sister went back to work with street children in the Pelhourinho district of Bahia, where she fell in love with a former street boy, a carefree rastafarian called Rasbutta da Silva. …read more

In 1988, Nicholas Shakespeare published an acclaimed article about his search for the leader of Sendero Luminoso, the world’s deadliest revolutionary organisation. He never met Abimael Guzmán. That was the point. Noone did.…read more

The location: a flat off Ladbroke Grove in London. The time: 2am, early November, 1995. I’m lying across the bed, despondent, broke and just back from India where I spent my last penny taking the girlfriend to whom I’d dedicated The Dancer Upstairs …read more

Early in 1999 I flew from London to Sydney and then, on Valentine’s Day, to Tasmania. I’d just finished writing a long biography, seven years work on one man, the writer and traveller, Bruce Chatwin, and I was burnt out. One of Tasmania’s attractions was its remoteness …read more

One March day in 1937, “feeling very ill and alone in the world”, my aunt Priscilla caught the Paris train from London’s Victoria Station with £5 in her pocket. She was 20, unmarried and pregnant, and had decided to go to France, where she had grown up, to have an abortion. …read more 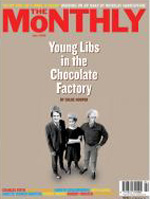 Dr Maurice Raad was a large,chubby South African, 53 years old, with a prominent mole on his right cheek. He appeared harassed on his first morning.

TAHITI STRAIGHT TO THE HEART

Matisse went for the light; Gauguin went for the women. Nicholas Shakespeare went to the honeymoon islands of French Polynesia on the voyage of a lifetime, …

THE QUEST FOR THE TASMANIAN TIGER

One wet night in March 1982, Hans Naarding was surveying snipe in northwest Tasmania when he came face to face with a Tasmanian tiger