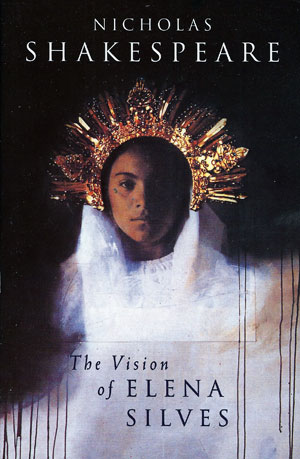 In the Amazon city of Belén, in the heart of the Peruvian jungle, three old men sit on a bench. They sit in the square every day under the hot sun, remembering the women they loved and the world when it was a better place. One day a woman hurries past their bench whom all have reason to remember – Elena Silves, the girl with eyes as blue as the sky who once saw a vision and has been incarcerated by the Church authorities in a convent high in the Andes ever since. But the old men remember something else. They remember that Elena had been in love at the time with Gabriel, a student revolutionary who became the most wanted man in Belén.

Written with precision, clarity and rare beauty… Alongside Salman Rushdie and the late Bruce Chatwin, Shakespeare now joins the ranks of the New Exotics school

An Englishman’s novel of magic realism, flavoured with the more traditional English spices such as thriller and tourchsong, and a touch of Anglo-Saxon irony… A fine literary novel, combining several traditions and genres of fiction

A novel of action in the best tradition of Conrad and Greene… Love, violence, revolution and death – a denouement that is unexpected, shocking and brilliantly conceived… I closed the novel with both satisfaction and regret

The Vision of Elena Silves is a terrific novel

Thomas Wavery is the new Consul General at Abyla on the tip of North Africa. A career diplomat, Wavery was once a high flyer, but an affair with a younger woman has dashed his dreams of ambassadorship. He arrives in Abyla with his wife suing for divorce, his passport stolen by a Gibraltarian ape and precious little enthusiasm for the task ahead. His one hope of redemption is a visit from his new love.

A deeply satisfying book. I feel quite exceptionally inclined to read it all over again

Wavery’s story has a lyric simplicity and an emotional subtlety that are moving, involving and beautifully observed

The Vision of Elena Silves was almost too precociously good. The High Flyer rolls back the doors of the Shakespearian bunker to reveal the arsenal within. It’s a very good novel

The Dancer Upstairs, 1995 (Chosen by the American Libraries Association as the Best Novel of 1997)

This novel explores one of the most astonishing stories in the whole history of twentieth century terrorism. Colonel Rejas was the policeman charged with the task of capturing the Peruvian guerrilla leader Ezequiel, but having been dismissed he finds the burden of silence and secrecy too heavy. On meeting Dyer, a foreign correspondent, he is moved to relate the tortuous progress of the manhunt for the first time. The Dancer Upstairs is a story reminiscent of Graham Greene and John le Carré – tense, intricate and heartbreaking.

A completely overwhelming novel, and I suspect that it will become a classic… one of those perfect novels

Shakespeare is interested in grand themes: love, vocation, politics and the corrupting power of moral and ideological absolutes… The Dancer Upstairs will be enjoyed by any kind of reader… It is enviably good, a genuinely fine novel from a writer who possesses real heart and flair

As cracking a story as any yarn, as informed as any journalism, and delivered with firmness and urgency

Astoundingly good…This dramatic, moving story demands you put your life on hold until it is finished

A beautifully crafted tale of love, obsession, and terror

Shakespeare explores an explosive situation in Latin America, deftly mingling love and suspense in a powerful, persuasive narrative… Precisely, beautifully detailed, a tale both faithful to its time and utterly timeles

Nicholas Shakespeare, using only black marks on white paper, has set in 1990s South America a story quite as evilly enchanting as the one about The Third Man Graham Greene set in Vienna… Shakespeare’s unadorned prose is as clean and precise as the coroner’s scalpel. The Dancer Upstairs is an extraordinary story; no grown-up reader should neglect it

A young Englishman visits Cold War Leipzig with a group of students and falls for an East German girl who is only just beginning to wake up to the way her society is governed. Her situation touches him, but he is too frightened to help. He spends decades convincing himself that he is not in love until one day, with Germany now reunited, he decides to go back and look for her. But who was she, how will his actions have affected her, and how will her find her? All he knows of her identity is the nickname he gave her – Snowleg. Snowleg is a powerful love story that explores the close, fraught relationship between England and Germany, between a man who grows up believing himself to be a chivalrous English public schoolboy and a woman who tries to live loyally under a repressive regime.

Superb… Beautifully written, rich in character, it displays all the courage for which its hero so desperately wants to be recognized

A brooding, introspective, deftly crafted novel… A moving story that speaks volumes about an era and a political system that is rapidly slipping into the recesses of our memory

Like Michael Ondaatje in The English Patient and Shirley Hazzard in The Great Fire, Shakespeare weds a formal, detached prose style to a deeply romantic theme; the result is a powerful, ethereal love story set against the twisted politics of East Germany under communism…. A beautifully written, utterly compelling story of love and politics

A volatile cocktail of passion and politics

A richly imagined tale of thwarted romance, between characters whose lives have been warped by East German treachery under Communism

Already my bet for this year’s Booker Prize. A superbly achieved and moving novel

Following the death of his parents in a car crash, eleven-year-old Alex Dove is torn from his life on a remote farm in Tasmania and sent to school in England. When he returns to Australia twelve years later, the timeless beauty of the land and his encounter with a young woman whose own life has been marked by tragedy, persuade him to stay. They marry, and he finds himself drawn into the eccentric, often hilarious dynamics of island life. Longing for children, the couple open their home to a disquieting guest, a teenage castaway, whose presence in their home begins to unravel their tenuously forged happiness.

If he has not previously earned the right to be considered a world writer, this novel should confirm it… A resonant fiction, affirmative and very human

A remarkable novel. It is brilliantly successful in portraying the forlorn, claustrophobic, gossipy, defiant little society in which it is set…This latest work shows Shakespeare to be one of our dozen or so best

I read it with complete absorption, wholly immersed in its world. It has a palpability and veracity which is quite mesmerising. A tremendous piece of work.

Engagement with the sea… its significance in the unplumbed depths of human psyche, is the real, undoubted strength of this novel

An impressive, poignant piece of work

An astute portrayal of thoughtful characters…Elegant and enjoyable

What would you do if you suddenly and unexpectedly inherited £17 million? This is what happens to Andy Larkham, recently jilted lover, and resentfully underpaid publishing minion. Arriving late to the funeral of his favourite schoolteacher, he ends up in the wrong chapel with one other mourner, too embarrassed to leave. Pressured to sign the register, little does he realise what effect that signature will have upon his life. The extraordinary story that follows tells of one man’s failed love, the temptations of unanticipated wealth, the secrets of damaged families and the price of being true to oneself. It is a romance for our times.

Thoughtful and beautifully observed… Never predictable, this novel combines a remarkable narrative force with the lightest of touches. A book to savour and pass on

Shakespeare has taken great risks with this novel, intertwining different stories, writing in different registers, mixing fantasy life with cruel reality. He brings it off; different passages in different veins contrive to ring true. It’s an utterly absorbing and enjoyable novel, one so engaging that you find yourself willing it to end happily. It is a Romance which moves with assurance from wild improbability to a reconciliation with things as they may truly be

Completely riveting and very funny indeed. Shakespeare at his empathetic best, as he mines the fragile seam of our desire to be loved for who we are

A very funny book indeed, beautifully plotted, and it tells a nice morality tale about the nature of avarice, and the absurdity of our times 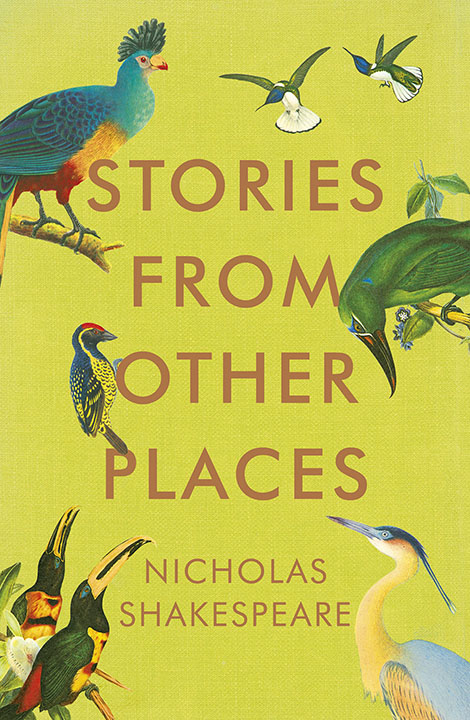 Stories From Other Places

Nicholas Shakespeare’s collected stories take us across oceans and continents into the intimate lives of his characters and the dilemmas and temptations they face. The opening novella, Oddfellows, tells the little-known history of horrifying events that occurred on 1st January 1915 in the Australian outback town of Broken Hill, where, on the citizens’ annual picnic outing, the only enemy attack to happen on Australian soil during World War I took them by surprise.

The other stories range through India, Africa, Argentina, and Canada, and include a magnificent tale of civic folly which sees an unreliable young councillor from the Bolivian mining town of Oruro lose himself in the seductions of Paris while trying to commission a bronze statue of his local hero. All of them demonstrate Shakespeare’s talent for insight and drama, and his fascination with connection and disconnection and cultural misunderstanding.

One of Britain’s finest writers… I do not expect to read a more formidable piece of short fiction this year.

In each story Shakespeare brilliantly transports us to other places, times, cultures and communities, but for all their differentness and exotic heat and dust, in essence they are places we know only too well.

Shakespeare has mined, shaped and polished one of the most superb literary gems I have read in recent times. Only John Boyne’s The Boy in the Striped Pyjamas comes close. Facts and fiction merge in this riveting and relevant work. In a word … brilliant!

A spare, brilliantly evocative tale of the outback jihadis and the attack most of us have never heard of. A slight but powerful book and Shakespeare immersedhimself in the time and place to write the story. Recent terrorist attacks have, sadly, accentuated the fact Shakespeare’s story is a timely one.

Nicholas Shakespeare has created a slim, sensitive and simply beautiful novella. He writes with exquisite restraint of the yearning, ignorance, hope and hopelesness of life in the wartime mining town. It is history it seems we’ve been doomed to repeat.

Shakespeare captures this historical moment beautifully and in elegant prose creates a complex inner life for Rosalind, who is a wonderfully drawn character. It’s a fascinating story, however, and skilfully told. It is also timely. Because the story Shakespeare tells resonates so deeply with current tensions, it is weightier than its length might suggest.

What a strange and enticing story, told with a great sense of escalating tension but also in a somewhat detached manner. Here is an account of the only enemy attack on Australian soil during World War I. It happens in Broken Hill during the annual picnic day in 1915. Its short and yet very meaty. Love this.